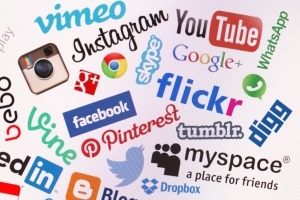 We memorize logos the same way we memorize the alphabet

Something’s going on in your brain when you look at a logo. It’s beyond the colors. There’s a specific psychology and meaning behind shapes, and brands are using this to subtly communicate messages.

The name of your brand is important, but the psychology behind acceptance and desire tells us that the visual of your company is even more important. That’s because our brains are hardwired to understand and memorize shapes. It’s the way we learn things. We learned to read because we memorized the shape of letters.

Is that sinking in? We read and write because we memorize shapes. So if you’re a brand, you’ll be memorized by a shape. The Nike swoosh. The McDonalds arches. The Olympic rings.

Your logo has some heavy lifting to do for your brand. But that’s why logo is actually the perfect word for what it has to accomplish. Logo is derived from the Greek word logos. The literal meaning of logos is word. Logo design is the process of creating a visual word—a shape exemplifying the identity of your business that people will memorize.

Words have a general similar meaning to us. We call these “definitions.” But words bump up against us based on personal perspectives. Logos get the same treatment in our minds; they’re consumed and interpreted based on experience. Each attribute of a shape has the ability to communicate something about your brand.

Are you just starting out in your industry? The shape you select for your logo goes beyond aesthetics. Shape conveys emotion and feelings. Get it wrong, and the audience you want to please could find you anything but lovable.

It’s been reported that Pepsi paid a million dollars for their new logo. People took to social media and expressed their displeasure. Why the outcry whenever a big brand messes with their logo? The answer is simple: companies may own their logo, but they don’t own their brand. The brand is represented by the logo, but the customer owns the brand. It lives in our minds; we’ve learned its shape. It’s there amongst the letters of the alphabet.

How would you feel if tomorrow you were told that the letter “P” had a new shape? You’d be rather displeased with the letter “P”. Why did “P” have to go and mess around with itself? Maybe you just wouldn’t use the letter anymore. What a bother.

Get it right, and leave it alone

Here’s what basic shapes have to say:

The straight edges of squares and triangles suggest practicality and stability. You can lose your balance following a curve, but maybe not so with straight edges.

Triangles stand for power, science, the law, and sometimes even religion. There’s a masculine air about triangles, so it’s to surprise that logos containing these shapes tend to be for or about masculine products. Chevron works as a good example.

We associate vertical lines with masculinity and strength. Lay those lines flat and the result is a transformation to calm and tranquility. These masculine attributes often get prominent placement in the logos of companies whose products are inclined to be used by men.

Why there’s no such thing as a perfect logo design

It ultimately becomes subjective. Logo design is a process of assembling shapes that express emotions. It’s impossible to be precise. We don’t yet have that level of access to the subconscious mind. Until then, it’s pure aesthetics.

We know enough about how our brains process shapes to select the right ones to convey a semi-specific message. Nobody argues about what the letter “P” stands for. Everyone argues about what the new Pepsi logo stands for. What will they say about the shape of your logo? If you choose shapes based on how they play with our brains, you’ll at least get everybody on the same page.

In a branding rut? Contact the pros at ContentBacon! Our staff of professional writers, designers, and the like can collaborate with your business or company to create content marketing (and logo) success! Get in touch with us today.