A Preference for Pictures: Why Our Brain Loves Infographics 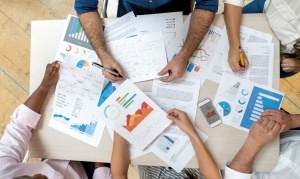 Because, data. And the Internet.

Mention infographics and people might tell you, “yeah, it’s this kind-of new thing that’s been around just the last couple of decades”. Because, data. And the Internet. But newsflash, people: infographics came to be long before Al Gore decided he would invent the World Wide Web.

For starters, an infographic is a visual interoperations of data (at its most basic state). Essentially, even Egyptians were using infographics back in 3000 BC. But we could track back even further than that—the first examples of infographics have been hanging out as cave paintings for the last 30-something thousand years.

It’s right to feel that infographics as we know them have only been around for a short while. Edward Tufte is commonly thought of as the modern-day father of data visualization. He began teaching a course at Princeton about statistical graphics in 1975; establishing himself as the premier subject matter expert by 1982.

At the heart of infographics are pictograms. You know—those universal stick figures we find on bathroom signs. Believe it or not, stylized images representing us humans and our belongings really didn’t make it into the public eye until artist Otl Aicher introduced them on maps during the 1972 Munich Olympics. So, yes, the fancy-schmancy version of infographics that we know and use today is still quite young. However, the idea and process of using visuals to express a dataset dates back farther than we’d think!

What the brain craves

There’s a reason why infographics burst on the internet scene and became the preferred way we like to consume statistics. And to say it’s been a burst might be an understatement. Statistics indicate that the use of infographics online has increased by 9,900 percent since 2007.

The same reason today as it was 30,000 years ago when we were visualizing our odds against saber tooth tigers as cave paintings: we are visually wired creatures.

We can interpret the sense of a visual scene in less than a tenth of a second, which came in handy when navigating our saber tooth tiger-infested world 30 centuries ago. Nearly half of our cerebral connections are dedicated to visual processing, and 70 percent of all our sensory receptors are concentrated in our eyes.

Infographics and the internet came along not a moment too soon. Thanks to our modern world, we’re inundated by information. It’s estimated that we are exposed to about 34 gigabytes of information daily. That’s over 100,000 words, and over five times the amount of data we upload into our brains each day as we did in 1986.

The irony is that we actually only read about a third of these words. The reason is simple. Words bore us.

Our visually predisposed brains prefer the image-based elements of infographics. They greatly increase our ability to comprehend. It doesn’t matter what language you speak, or even that you can read. A skull and crossbones printed on the side of a bottle stands for poison.

Information displayed as visual data allows us to understand and follow directions an astounding 323 percent better than without it.

How to give good infographics

A visual display of data is the most efficient way to communicate complex information. Our brains decipher graphical organization and structure far more efficiently than words. We may not be ready yet to retire the alphabet, but when was the last time you saw words written restroom doors?

Adding infographics and visual content to your content strategy can be great for your business. Don’t know where to start? No worries—ContentBacon has your back! Contact us today to start fine-tuning your tactics.