Is Email Marketing on Its Way Out?

“The reports of my death are greatly exaggerated,” said both Mark Twain and email.

The most successful marketers want you to keep believing all those things you think you know about email marketing: nobody reads emails. Spam filters prevent most from getting to recipients, anyway. Social media is better. This is all fake news – even the spam stuff.

You’ll have to stop hating on spam filters now that artificial intelligence is their new BFF. AI has made both sending and receiving emails efficient and precise. And okay, 3.5 billion people or more than 45% of the entire population uses social media, including over 90% of millennials use it daily.

Guess what has a higher number of users? That’s right. Email.

Here’s what else you need to know about the power and effectiveness of email, and why it’s still the holy grail of marketing. 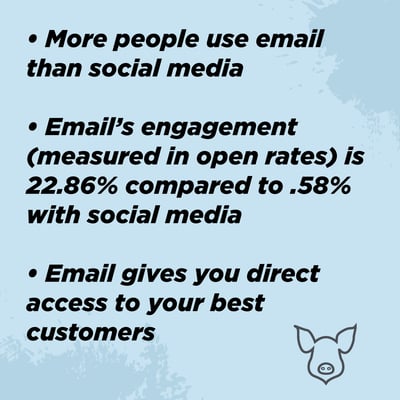 Email by the numbers

We’ve already mentioned that 3.5 billion people have social media accounts. It’s about 80% of those with internet access.

The total number of email users surpassed 3.9 billion in early 2019. Yawn. Email. Not only do more people use email than social media, but they also prefer it as a way for brands to communicate marketing messages to them. According to OptinMonster:

● 60% of email users prefer promotion information that way, as opposed to just 20% who want information via social media.

● 58% of people check their email before they do anything else in the morning. Compare this to the 14% who check social media first.

● More than half of all people with email accounts check them at least 10 times each day.

● Send out an email to your subscriber list, and it will successfully reach at least 85% of them. No social media algorithms will get in the way. It’ll have an open rate of nearly 23%. Social media’s equivalent to an open rate? A measly .58%.

● Only 12.5% of consumers surveyed said they might consider clicking on a social media “buy” button. But at least 60% of them said they actually made a purchase because of a marketing message received via email.

It would be unwise to completely sidestep social media as a marketing tool, even when heeding the power of email marketing.

Social media is far more effective at building brand awareness because of its ability to create conversions. Social media excels at generating curiosity, which then sends prospects over to your website, e-commerce store, or landing page.

Social media platforms are aware of their power, and they keep what you really want – a prospect’s contact information – behind closed doors.

Besides the social media platforms, there’s also ad platform giant Google acting the same way, as well as Amazon. The e-commerce monster launched its advertising division to monetize its consumer and purchasing data.

How’s that working for them? It grew by 40% in 2019, with ad revenues surpassing $4 billion for the first time in the fourth quarter.

Don’t expect these walls to come tumbling down any time soon. They’ll likely grow thicker and taller, moving you farther away from having the direct communication that email marketing provides.

The best of both worlds

Social media is an excellent way to set off awareness concussion grenades. It builds brand recognition and helps you to create a virtual community of customer advocates. Social media also drives traffic to your website and landing pages. That’s just half the battle.

With an email address and the ability to communicate directly, you can deliver personalized messages and offers, convert email message subscribers into customers, and then retain them by continuing a one-on-one conversation.

Social media is the knock on the door. Email marketing is the key that unlocks it and provides you with a return on your investment.

Now you have a perspective on the strategic advantage of email, but what about the tactics? What works best at getting people to open, read, and respond?

You’re probably itching to check your email right now, so go ahead and do that first.

Then check out these 23 email marketing tips. Some are common sense, such as #22, which reminds us of the importance of basic email hygiene. Others might give you a, “Oh, that’s right” moment, like tip #10 about adding alt text to your CTA image.

Email is not dead. It’s evolving. Did you ever think you’d see emojis in a B2B email subject line?

From Prospects to Promoters: Content That Converts Customers and Harnesses Extra Referrals

A customer’s value doesn’t end when they buy in to your business. By delivering the right content at the perfect time, you can elevate your customers to..

How to Beat Content Inertia and Build Momentum with the Flywheel

Is your content working enough for you? This flywheel marketing guide will teach you how to harness momentum and overcome content inertia. Key Takeaways

The High-Conversion Content That Dominates at Every Buyer’s Stage

What makes a Prospect become a Customer? It all depends on whether your high-conversion content strategy delivers the right value at the pivotal moment.